The note about what to write in a card to a grieving person in my last post seemed to strike a cord with some readers. Some recognised the uncertainty of what to do for the best, others realised they’d never considered how this simple gesture could be interpreted by the recipient, others recalled past occasions when they felt they should have perhaps done it differently. So, I wanted to focus a little more on this.

Firstly, this is just my observation, I expect even those closest to me feel differently. As I said, grief is different for everyone and other people might have strong feelings about this or relate to just some elements.

We all have moments when we wish we’d said or done something differently in a difficult situation. The night my grandad died, when I was in my late teens, I wish I’d been brave enough to sit with my mum instead of going back to my flat, as I found her grief too difficult to witness – I put my discomfort before her comfort. I’ve learned a lot about compassion and grief since then.

As for greetings cards, I’m talking about the birthday and Christmas cards that will be exchanged over the years. I feel it’s perfectly acceptable to write a card to the (for want of a better term) ‘living’ family members but perhaps add a note to your message which says something like ‘praying for/thinking of you’. Or you can add to the salutation ‘and thoughts for your darling daughter/son/husband/wife/mum/dad’ etc. Or even name the departed in that message and write something more. In any case, the very fact you’ve bothered to send a card and the words you choose to write in it won’t hurt and might actually bring much comfort on an already difficult day. This might be a more obvious consideration when it is a lost child (although I don’t personally believe so).

From my perspective, I am a mum of three children, soon to be four. Abi will always be my daughter; I gave birth to her and raised her for twelve wonderful years, and so far I have always included her name in messages from my family. I actually find it hard not to write her name, out of habit if anything, our names seem to flow easily in order. Perhaps, over the years, it will become smaller on the page, but now it seems more an effort to think of an appropriate way to do this than just simply writing it as I’ve always done. (Incidentally, as the chief card-writer in our house, I made the decision not to send a single Christmas card last year. It did feel strange not to, and I almost bought some out of habit, but I couldn’t face having to write Merry Christmas hundreds of times when I felt anything but merry, and to write Abi’s name again and again.)

This brings to mind another aspect of losing a child which impacts the kind of familiar conversation we have all the time. Just like the common topics such as asking someone if they’re going on holiday this year, or what they do for a living, we ask about their families. When I meet someone new, the question usually arises and I find myself having to work out how to respond without creating an atmosphere – the bereaved spend an awful lot of energy making sure other people are okay! Being pregnant, I get asked this more than ever:

If only they knew… sometimes I tell them about Abi, but as time goes on, I find I’m only doing this if I feel it necessary (at first, I felt I needed everyone to know what I was going through). But I’ve noticed that it’s really stilted my ability to talk about my children. I find myself closing up about all of them, rather than being willing and open to share my pride in them.

This is purely an observation of how social etiquette can get complicated. I’m as guilty (if that’s the correct term) as the next person. I’ve lost count of the times I’ve put my foot in it without realising until it was too late. My earliest exprience of this was when one of my best friend’s dad died from a heart attack. We were only about 12 and she was off school for a long time. A couple of weeks after she returned, we were at a birthday party and had been running around playing a game. She went over to the window to look out for her mum. I rushed up beside her, puffing and panting from the laughter. “Phew, I almost had a heart attack then,” I said. She didn’t respond. I continued to laugh at my breathlessness. “I don’t find it funny,” she simply said and walked away. I distinctly recall feeling winded as I realised what I’d said. How on earth could I have been so insensitve? She was exactly the wrong person to say that to! But the damage had already been done, I went over to her and said sorry and blushed red. She shrugged it off but I could tell she was angry. She went home and I felt it took a while for her to forgive me afterwards.

Even now, though I have managed to create a sort of scripted response about what I tell people, I still have to consider what I’ll say. Only the other day, I met another new person, a lovely local lady who I may or may not meet again anytime soon. She looked at me with kind eyes and asked if it was my first. “No, my fourth,” I replied (straight forward enough).
“Oh, how lovely, so you’ll know what to expect then. What do you have?”
“Two girls and a boy, and this one is a boy too.” (Starting to get tricky, wondering how to change the conversation.)
“That’s lovely, so you’ll have two of each.”

That was the point where I could have said something about Abi. My brain worked double time to find the words. I had to quickly assess whether I thought this lady would mind hearing about my situation. If I was likely to see her again anytime soon. If it was the right situation to divulge a ‘private’ matter. Should I be vague but honest and tell her that one of them was already in heaven? Should I be more matter of fact and say my eldest daughter died in February and what from etc? Should I say anything at all and save this lady from knowing what I’m really having to live with and avoid the risk of making her feel bad or awkward? I found myself hesitating over my answers, and feebly smiling when she said I must be terribly excited. (I’m not terribly excited; I’m nervous and anxious, my emotions are all over the place.)

So I decided to keep quiet and just gave a small smile (pregnant women can be forgiven for being a bit ‘distant’). In fact, it is sometimes nice to allow myself to be believed to be a busy mother to three, nearly four, again. To not be seen as a grieving, mum; not that woman whose daughter died. But then what if I meet that lady again soon, or she finds out from someone else and remembers our conversation? It’s an aspect of social etiquette that’s always tricky, although it’s unlikely she would raise it in any case – who would! It’s a bit like someone mishearing your name and you don’t correct them in good time so you always get called it (Kerry!) and years later the person finally realises and feels embarrassed. Though I’m reminded of the infamous Rodney/Dave gag from Trigger (RIP Roger Lloyd-Pack) in Only Fools and Horses. It’s been shown a lot over the past two days following the sad news of the actor’s death, someone I’ve enjoyed watching on TV all my life. Talking of which, I saw this cartoon today which made me smile and I think Roger Lloyd-Pack would see the funny side too! 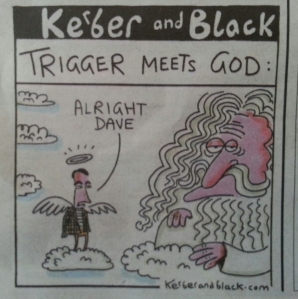 7 thoughts on “How many children does a bereaved mother have?”