After the week I’ve had, I’m actually amazed that this is the word I’ve chosen to sum it up! I have many negative words I can relate to this week – hard, emotional, stressful, sad, worrying… but I’m determined, as ever, to claw some positive from what I’ve experienced.

So this week I have felt empowered!

END_OF_DOCUMENT_TOKEN_TO_BE_REPLACED

Last month, I decided to get my six-month-old baby weighed at my local mother and baby clinic. The clinic runs 11-12.30pm every Thursday out of the local community centre. I wasn’t particularly concerned about Monkey 4’s weight, but as he had reflux and hadn’t been weighed for a while I wanted to make sure he was still on track.

Wanting to miss the rush, I arrived at 12pm and there were two health visitors, both dealing with mums and their babies at the two weighing scales. One health visitor was in deep conversation with her mum, so I waited next to the other health visitor who appeared to be finishing with the mum and baby with her.

END_OF_DOCUMENT_TOKEN_TO_BE_REPLACED

So, following my last post about my complaint of the way Virgin Mobile handled my contract closure, Virgin Media has finally responded to my complaint in a more human way.

I missed a call this afternoon from the Head of Customer Services, but I’ve just spoken to the Chief Executive’s PA who called me about the issue.

END_OF_DOCUMENT_TOKEN_TO_BE_REPLACED

Dear James (if that’s even your real name),

I think you missed the point.

When I posted about my call to cancel the phone contract I had for my deceased daughter and shared it on Twitter and you said you would ‘look into my complaint’, I expected at least some attempt to show you give a monkeys.

I was impressed by the speed of your investigation, though not so with the ‘template’ response (typo included!):

‘Thank you for taking the time to contact the Social Media Team.

I’m sorry to hear of your recent bereavement and n behalf of Virgin Media, I’d like to offer you our condolences at this difficult time.

I have now arranged a disconnection of the mobile account and no further balances are due to be paid.’

You know what, ‘James’, I don’t want your sympathy. I never did.

You don’t need to pretend to be sorry about my ‘recent bereavement’ – you clearly have no idea what has happened to me.

You don’t know that my daughter, Abi, died on 10th February 2013 following a brain haemorrhage.

You have no idea how I still remember buying that phone for my daughter just before her 12th birthday.

You wouldn’t begin to understand how I feel knowing on the day she collapsed that she used that phone to text me from school saying she didn’t feel well.

I still have the photos and selfies she took on that phone, her last just a week before she died…

Here, have a look at the girl behind this contract. Just a girl, like any other, using a phone her parents bought her… a girl who died in my arms and who won’t ever have the joy of playing with her smartphone, her friends, anyone.

But then, I don’t care about you or yours either so I guess we’re quits.

The sterile tone of your reply made me feel a kind of guilt, as though by ‘moaning’ I was like every other one of your hundreds of customers today who was ‘after something’.

It might surprise you to know that I’m not after some kind of recompense – I don’t want free phones, free minutes, a voucher, or any-bloody-thing – other than my daughter to not be dead anymore and for companies like yours to get a soul and make this process as painless as possible.

I didn’t need you to ‘disconnect my mobile account’ – as the guy did that for me yesterday.

I don’t need you to tell me that there are ‘no further balances’ – that was the point of my call with the guy yesterday too. I have paid my full 24-month contract like a good customer and that is that.

What I needed was for you to apologise for how poorly your guy handled that call. To tell me that you’ve spoken to him personally to make sure he understands what happened and how to handle a bereaved customer like me in future.

What I needed was for you to tell me that you were so shocked by the process which forces your staff to try to retain customers no matter what, that you are now looking into ways of getting that changed somehow.

What I needed was reassurance that, behind the emails, you are human, people with families of your own who would dread the thought of standing in my shoes for even one second.

Ironically, I dealt with Virgin Media today to renegotiate our TV/Internet package, and the woman couldn’t have been nicer – funny that, as she was retaining business, I wonder what she would have been like if I’d tried to leave … because my daughter died.

Still, I don’t hold bad feelings, how can I hold bad feelings against a ‘robot’? But I think people should know how this turned out – I think my readers would be interested. I’ve learnt the hard way that things like complaining are pointless in the scheme of things. Life is for living not complaining about. I just won’t be buying another mobile phone off you again in a hurry.

So it all kicked off a bit yesterday afternoon as I tried to finally sort out Abi’s mobile phone contract. And, as usual, it’s the big companies who seem to have no idea about dealing with the bereaved. I’ve blogged about this before.

In October 2012, we bought Abi a new mobile phone (as she’d just started secondary school and as a part early birthday present). I took out a 2-year contract with Virgin mobile as they were offering a Samsung Ace for £14 a month. It was less than she’d been spending on her pay as you go, so it sounded a good deal.

Then, four months later, she died.

END_OF_DOCUMENT_TOKEN_TO_BE_REPLACED

Ever since I had children, I’ve been bagging up clothes and toys for either car boot sales or charity shops, although it always seems the more I ‘recycle’ the more ‘stuff’ comes back into the house!

It’s been a long time since we did a car boot…  I say ‘we’ as normally Abi and I would get up at dawn to go and do one together, she really helped with setting up, tidying and selling – it was fun.

END_OF_DOCUMENT_TOKEN_TO_BE_REPLACED

I wrote this post on 15 March 2013, just a month after Abi died. I needed to document the trauma and stress that I’d had to live, to get it out of my head in some way. I still remember every moment. I will be resharing my story of our terrible time, more for those readers who are struggling to come to terms with a similar sudden loss. I pray it brings them some comfort, just to know they’re not alone.

Having been transferred to Frenchay Hospital, we were first shown to a private ground-floor waiting room which was homely, with modern furnishings and a kitchenette. The policeman who had driven us over from Gloucester made us a cup of tea before he left. It was now around 1.30am, but the night was just starting for us.

END_OF_DOCUMENT_TOKEN_TO_BE_REPLACED

This weekend was stressful and emotional, as well as coming down with the obligatory back-to-school cold.

I finally plucked up the courage to attend a first aid course and it’s taken me some time to process what I learnt, and to deal with the memories and emotions that it stirred up.

END_OF_DOCUMENT_TOKEN_TO_BE_REPLACED

Last night, we watched the Hollywood blockbuster, Gravity, for the first time. It’s been out for ages but as parents who (now) never get time out to go to the cinema, we have to wait until it’s shown on Sky Movies. We were hooked from the start, and both watched it to the end without taking our eyes off the TV screen.
END_OF_DOCUMENT_TOKEN_TO_BE_REPLACED

I love September. It’s a bit like my New Year. September is usually a lovely month weatherwise, I feel refreshed after the holidays and I’ve usually had a spring clean in readiness for the new school term.

But I’m deflated this year. Last year was different, odd. I was about three months pregnant and completely focused on that. The pregnancy hormones and tiredness kept me occupied.

This year, I have my healthy baby who brings laughter to our house daily. Yet this year my grief emotions are surfacing again for new reasons.

My second daughter left primary school in July and tomorrow will be her first day at secondary school, the same school Abi attended for just six months before she died.

I remember us taking photos of her. That ‘first day’ photo. I have to do this again, see my daughter dressed up ready to start this big new stage in her life, just as Abi was.

Abi was so excited about growing up. She was awake early every morning for school, had everything ready. She spent months choosing her school bag, and deciding how to wear her hair. My other daughter hasn’t gone near any of her school stuff. She’s not interested in her bag or how she will look. She’s not looking forward to it one bit. Abi headed off to meet her friends an hour early! My other daughter wants me to walk with her. While she’s very mature for her age, she’s emotionally more attached to home and me, and her anxiety holds her back. I believe, though, that secondary school will be the making of her.

My stomach will be in knots for her and for the loss of Abi for some time to come, as she walks the path that Abi took for just six months… and when that time is surpassed, perhaps it will get easier for me as the experiences will be ones that Abi never got to live… It’s just another mountain to climb on this journey through grief. 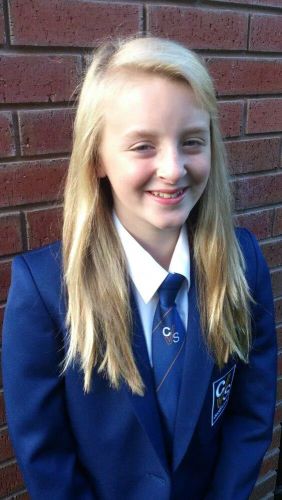 Abi on her first day at secondary school