Last month, I decided to get my six-month-old baby weighed at my local mother and baby clinic. The clinic runs 11-12.30pm every Thursday out of the local community centre. I wasn’t particularly concerned about Monkey 4’s weight, but as he had reflux and hadn’t been weighed for a while I wanted to make sure he was still on track.

Wanting to miss the rush, I arrived at 12pm and there were two health visitors, both dealing with mums and their babies at the two weighing scales. One health visitor was in deep conversation with her mum, so I waited next to the other health visitor who appeared to be finishing with the mum and baby with her.

When it was my turn, I stepped up and, before I could speak, she said, ‘I’m sorry but I’m leaving now are you okay to weigh him yourself?’ She looked hassled, like she’d already stayed too long. I was confused as there was still half an hour till the end. Another mum turned up after me and the other health visitor was already busy with her next mum.

I didn’t know how to use the electronic scales, so as she was hurriedly putting her coat on, she was half giving me instructions on what to do. I felt irritated not having her full attention.

I began to undress Monkey 4 and she picked up her bags and mouthed, ‘And are you okay?’ (with the emphasis on ‘okay’ to mean ‘not depressed or anything’). I almost laughed. I simply replied yes and she left.

She didn’t want to know if I was okay. She didn’t have time to find out that I was grieving. She couldn’t stop to discuss why I was worrying about his weight and reflux. She wouldn’t know that I had weaned him early.

I realise she may be rushing off to do a home visit on a mum in dire need, but this wasn’t a special self-weigh session, this was the only health visitor support session in my area each week.

I turned round and saw the other health visitor was already busy with her next mum. I weighed Monkey 4 and left feeling it pointless to return. 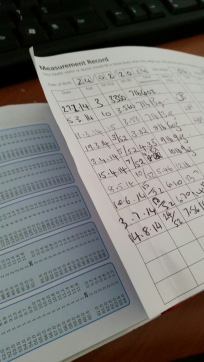 This is the first time I’ve self-weighed my baby. I’m so glad I’m not a first-time mum!

Times have changed, for the worse
I’m an experienced mum I know, but what if I wasn’t? Is that the support new mums are getting? Either I’m getting cynical in my old age (likely), or giving birth in this country has literally gone down the pan (definitely).

I’ve recently had my fourth baby; I had my first in 2000, my second in 2002 and third in 2007. I’ve had such different birth/antenatal care experiences with each of them, which has made me realise quite how poor and inconsistent the maternal care is in this country.

I’m not having a dig at midwives or health visitors, they are generally wonderful people and I’ve known some very special ones. They are clearly overworked and the resources pushed in all the wrong places. I’m having a dig at the system, at ‘the man’ who said that giving birth – and coping in the months after – is no more special than putting a leg in plaster or getting over a tummy bug.

Thing is, I’ve had these discussions with plenty of new mums recently and they all agree with me or have shared other depressing stories of neglect. I’m all for advancement and streamlining (if it is a better solution), but sometimes I wish we did things like the good old days, when new mothers were supported and cared for properly after the birth. It’s sad that the next generation will suffer as a result of cost-cutting.

A positive birth experience is a rarity
Of the mothers I’ve spoken to this year, there is a worrying trend in their experiences of birth. During pregnancy, they rarely saw the same midwife. In hospital, the staff are often too busy to give even basic care. Mothers simply aren’t listened to and are passed through the birth suite like cattle.

As an example, I heard of a woman delivering her second child who was told she couldn’t get in the birthing pool despite pleading to use it to ease her contractions. She was 4cm dilated and the midwife insisted she had to be 5cm. The mother was certain things were progressing faster than the midwife said, but the midwife disagreed. She then agreed to the husband going to move the car and left the mum all alone in her room. Rather dramatically, the baby suddenly crowned and the mum had no choice but to pull the emergency cord. The midwife appeared but still refused to believe the mum until she checked for herself. The midwife then got all ‘excited’, set off an alarm and a whole team rushed in for what was now a high emergency situation. The poor mum, so despairing of how much she was being ignored and how terrible the experience was becoming, grabbed the nearest towel and put it over her head, unable to look at the people who wouldn’t listen to her. Her husband missed the birth. They were sent home not long after and passed on to the next practitioner.

Birth seems to be summed up as – if the baby’s alive and the mother’s alive then all’s well, now off you go! Of course there are the positive cases, I’ve had them myself in the pregnancies where I was listened to, but mothers seem to more often than not have to fight for what they need rather than expect a certain level of care.

Antenatal care has been reduced to ticking boxes

Where’s the support?
As well as reduced midwife visits up to day ten, my health visitor visited me just four times after I had my baby this year – although it seems I was a ‘lucky’ one. The only reason I had ‘extra’ visits at home was because I cried a bit during the first visit because I was tired, emotional and grieving for my daughter. What’s more, the health visitor came from a different area and had no connection with my local GP, so it seemed pointless trying to explain things to her about my health and mental wellbeing.

The first time we met she started off by telling me how understaffed they were – thanks, that’s reassuring – and on another appointment she cancelled on the morning due to a meeting she had to go to – so get used to being second best to beaurocracy! The only thing she did when she did turn up was weigh my baby and plot it in a book. She gave me some general breastfeeding advice but nothing like the support I needed and instead a huge pile of leaflets I was expected to read.

It’s no wonder women give up or feel generally useless if they don’t have adequate support – as if handing over a leaflet makes everything okay. They can’t wait to get rid of you, and frankly, I couldn’t wait to get rid of her (it’s not even that she was horrible, she was a lovely lady, just doing a pointless job!)

When I compare Monkey 2’s health visitor appointments back in 2002, twelve years ago – I was visited at home ten times between day ten and five months old. Then again at two years old for a developmental visit. I recall each appointment being a more involved discussion of development, growth and my health. Nothing at all like this time round. It’s honestly a waste of time. I know I’m not alone in this experience and I should be lucky for what support I have had. Good maternal care in this country should not be down to luck!

The help is there… so long as you go and get it
The main difference now, I feel, is that new mums, at their most vulnerable due to physical and mental exhaustion, are expected to be proactive at seeking help. I don’t know about you, but when I’m feeling low due to tiredness or depression, even the most basic things seem overwhelming and I just want to hide.

Having help brought to you takes the pressure off and makes you feel looked after; supported. I found the same with my grief after I lost my daughter. The hospital had done its job and I was left with a pile of leaflets and numbers to call. All so confusing and of course I’m too upset; my mind is a fog. Then six months have passed before I’ve done anything and I end up just coping because I don’t know what else to do. Again, at my most vulnerable, I’m expected to be braver than ever by speaking out, asking a stranger for help.

It takes so much for a depressed person to feel safe enough to open up; a 10-minute doctor’s appointment isn’t going to do anything other than make them feel like inept time wasters. Well, that’s how I felt.

This is why I blog! I am fed up of talking to people who ‘should’ care but don’t (for whatever reason). I’m doing okay, but what of the mums out there with PND or who are mourning who aren’t able to even offload the way I do… it’s scary to even think about.

While I dislike being so negative about what should be a happy time, I share this hoping that if ever you find yourself in a similar position that you are able to speak out and demand the care you need, or get someone to speak up for you.

Our children are the future of this world and perhaps one day the government will realise that.

4 thoughts on “Never mind the birth plan, it’s after care you need to plan for”