My seven-year-old son (Crackernut) came running out of school this week and told me he needed to go to school dressed as an Iron Age man. Rather a random request – but I then realised it was their term topic (scoff, scoff, I should really be on top of this stuff right?).

Despite being in year three and knowing exactly what day his birthday or half term is, or when the next Wii game is out, he usually has no idea about dates and times – where it doesn’t really interest him. So something that has been told him half an hour before at school is quickly forgotten as he runs ahead home to watch TV. Selective memory!

His school isn’t too bad at giving notice, but this costume could be needed in the next couple of days, so I was relieved that this time they’d put a note in the bag as well as relying on our children to give us the full details. Thankfully, I have a whole week to sort it out (I can tell you’re already envious).

Crackernut said they were told they can’t wear a ready-made bought costume, I expect so the school isn’t forcing people to spend money and is encouraging the children to be creative. Fair enough, but we don’t all have boxes of material at home, and inevitably it’s the parents who have to be the creative ones!

Have you seen an Iron Age outfit? For boys it’s brown and cream or red clothes. Brown trousers and an oversized shirt with a belt, and a cape and boots. Here’s an idea… 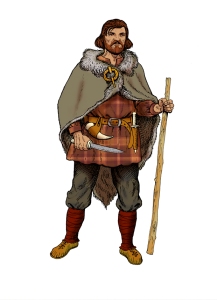 For those fab creative mums out there who can whip up a costume before you can say ‘Where’s the needle and thread?’, this would be an absolute doddle. But other than brown chinos, I didn’t have anything remotely Iron Age-manish.

I had a think about what I could use (my attempt at being a creative mum) and realised he’d either go dressed looking like a lady tramp in odd multicoloured mummy tops or he’d wear a cut-up sheet (and I’m not using my Egyptian cotton!).

So I could browse a charity shop but, frankly, I don’t have time what with working and running around after my baby.

So what did I do?

Yep, you guessed it. I popped on eBay and bought a costume for £8. Admittedly, it’s a Star Wars outfit, but it’s pretty much similar garb and he can also wear it again for fun at home. But now I’m slightly concerned I’ll get into ‘trouble’ for not cutting up one of my bedsheets!

I’m reminded of World Book Day last year, and there were lots of great posts online about the faff this causes (this hilarious article captures the essence of the crisis pretty well). But it’s not just once a year, is it? There are dress-up occasions fairly frequently. I don’t mind, it’s a good way for children to learn, but telling me I have to make something from scratch is going a bit far.

On World Book Day I decided I’d make something for the first time ever (as memories of being massively unenthusiastic in years gone by haunt me a little when I sent my eldest child to school dressed in black – to represent a letter in a book! After her sudden death, two years later, I had occasional pangs of guilt that I should have been a ‘better’ mum and made more of an effort on days like that. Don’t worry, they are just pangs!).

Anyway, I got creative with a bit of blue card and sent Crackernut to school as Mr Daydream (an ‘in joke’ in his case!).

It cost me £5. I thought it was funny and quite sweet, although he was a bit self-consciousness and did say ‘Why can’t I go as Spiderman like everyone else?’ as we left the house!

The thing is, making a costume can often cost just as much as buying a cheap one second hand. I spent £5 plus petrol buying the card for his Daydream costume, then time making it, compared to £8 delivered to my door for this Iron Age man one that takes no longer than opening the packet. Admittedly, it was quite fun planning and making a costume, so I’ve not ruled out doing it again, I’m just rubbish at it! We don’t have lots of cash to spare, or time for that matter, but I’d rather pay a little bit more for convenience at the moment.

I got to thinking about some of the other parenting shortcuts I take when it comes to school life:

Just as I’m impressed by the outfits other children come up with, I’m not going to feel guilty that I don’t throw my time and energy into every task the school demands – you have to do what you can when you can, and it may be that I’ll have more time on my hands when it’s my baby’s turn to start school in three years’ time, but that’s just how it is.

Life’s too short to worry! As long as Crackernut is learning, having fun, feels included and is comfortable, that’s all that matters.

What about you? Are there cheats you use? Do share as I’m all for cutting corners!

If you enjoyed this post, why not see what else I’m twittering on about: