[I didn’t post this blog about Halloween at the time, I suppose to avoid offending anyone or to put a damper on the fun, but reading back on it, it’s certainly worth sharing. It’s not a major worry for me now, and who knows how I’ll feel about it in the years to come, but it’s a classic example of how trauma and grief can distort things.]

This October 31st (2013), I was expecting to do the usual Halloween tea for my children, followed by a wander round the local houses, to those we know are happy for a visit, and collect some sweets. We only joined in with this tradition when my girls started school as other children seemed to be getting into the ‘spirit’ (excuse the pun) and did the same. Up to then, we considered ourselves quite lucky where we lived as we didn’t ever get bothered by trick or treaters.

It was never a particularly exciting event, though it was nice to see the children enjoy the novelty of being dressed up in fancy dress and out in the dark filling their buckets with sweets. It’s pretty low-key where we live – none of the full-on horror that some places go for.

This year, as with any event like this which involves children and memories of Abi, it was something I wasn’t much keen to do, but I felt my children would benefit from a ‘bit of fun’ after a long term at school. But, as the day drew nearer, I found myself drawing further away from it. At first it was the usual plan of going out for sweets, which then scaled down to just dressing up at home, with a few decorations, and then it was nothing…

I don’t mind how other people choose to spend this night. But now I see things in a new way and I am compelled to explore here why my views on Halloween have changed so much. After all, it seems to take so much effort to go against the norm these days…and is even harder to avoid when it’s rammed down our throats in shops and on TV.

With my grief still so very raw, eight months on from Abi’s death, we took the children shopping and headed to the usual ‘seasonal’ section of the shop… (admittedly, we did this after a bereavement counselling session which seemed a good idea at the time, but probably made things worse). We had almost forgotten it was Halloween, and when the children saw the brightly coloured displays in a shop window they reminded us that we’d not got anything.

There were lots of costumes, make up, accessories and sweets in the familiar black and orange colour scheme. But seeing the gruesome and eerily realistic death masks, I was suddenly reminded of my daughter’s death, her actual death, and my image of her resting beautifully in Heaven’s light was marred by seeing these horrible things. This wasn’t death. This wasn’t real. I suddenly questioned, what it was that made us enjoy dressing a child up to look dead, to look as though something horrific had happened to them…? I later found myself becoming anxious and upset when seeing pictures of the more realistic scary creations on children I knew… I must be losing my mind! No one had a problem with this except me! 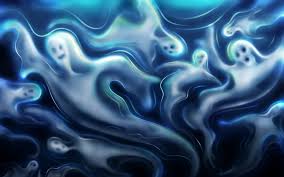 I’m sure this will come across as a huge overreaction to people who see this as nothing more than a bit of harmless fun, but I could only see past the orange glitter and funky wigs and into the dark part of my heart which holds those painful and disturbing memories of my dying child. And is it just me or are the costumes more macabre than ever? The cute ghost costume and pretty witches’ dresses for little ones are now mixed in with chain saws, artificial guts and other gore. I get that some people enjoy feeling a bit scared … which is one reason why Halloween is so popular, but for some of us who get easily spooked or who have been through a trauma, seen real blood and death up close, it’s not so much fun.

I felt I was being ‘silly’, not even my husband thought about it. I knew that all those lovely, caring people – including friends, family, neighbours – who joined in with the fun were certainly not out to offend or to cause upset … this was my issue not theirs. I’m certainly not about to become a complete miser and won’t say that we’ll never participate in Halloween again, it’s just that dressing up my children to make fun of death is not something I think I can do anymore…

My two younger children are and have always been a bit spooked by the whole ghoul thing. In fact, it was Abi who loved it more – she just wanted to be out with friends so it was any excuse, she saw the fun in everything. I’m sure she would still want us to have fun, but I think she’d understand why we needed to change the focus of that fun now. If I’m honest, I’ve never enjoyed it either and even when we did participate, we kept Halloween as light as possible, with pretty costumes and nothing too scary. This year, it of course brings a whole other perspective for them, and they are more easily scared. Just as I don’t want to go through the motions this year, why would I want them to see the gruesome side of death when they already have witnessed the real horror at home and we’re working so hard to build their confidence back up?

Crucially, my children agreed with me. When I explained that perhaps we could do things differently, I expected to be moaned into submission, but they both understood and in fact offered their own ideas. So it was a film and popcorn night for them. They both wanted to carve a pumpkin, which was fine, and my daughter carved a horse’s head in hers (because she loves them!). And we still got treats in to hand out to the children who did knock on the door, but we did it from the comfort of our home which was lit with comforting, not sinister, candlelight.

6 thoughts on “Halloween just got scary”