We’ve been having a bit of a clear out, which we need to do fairly frequently with six of us in the house. Our boys’ bedroom had become very cluttered with toys, clothes, books and teddies. We tidied it up but decided that as the large buckets of teddies weren’t played with much at all that we’d get rid of them.

Ha, well it didn’t quite work out that way. These were toys we’ve become so used to seeing and picking up that we’d stopped appreciating them. But as we were putting them into bin bags for the charity shop, we were sighing sentimentally over almost every one of them.

My husband was being more assertive about it but I suggested we put them aside so I could go through them again. So they were put into the baby’s bedroom to be ‘sorted’ later (aka taking the clutter from one room to another).

Then we decided to store them in the loft for ‘another time’, only I didn’t want to do that as they might get damp or ruined, and I didn’t like to think of them all abandoned up there (can’t you tell I’ve been subjected to Toy Story on loop this past month!).

So, a few weeks later, I sorted them out yet again! I found an old drawer under the cot and decided to put them all in there. After all Naomi might want to look at them briefly one day! I did manage to make a bag of stuffed toys for charity, but I kept most of the ones we were originally going to put away or donate! 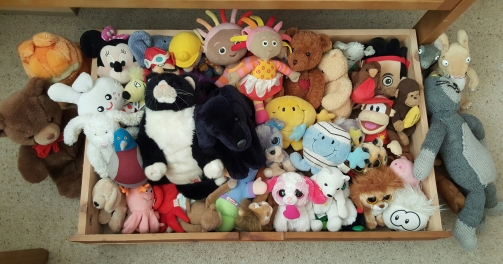 What’s wrong with me. They are just toys!

There are a number that we’ve had since before we were married 17 years ago. (Mr Happy and Mr Bump my husband, then boyfriend, bought me. Dastardly and Mutley were picked up during one of many leisurely shopping trips.) 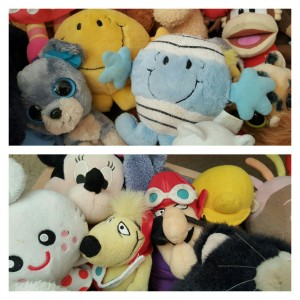 There are some that belonged to Abi, that I can remember her choosing, holding and us buying (lots of YooHoos, Moshi Monsters and a Puffle).

There are Beany Babies toys that we bought from the regular stall at the annual village fair. Nintendo toys and lovely soft Keel pets.

There are toys that remind me of places we’ve been as a family (Pidgey Pidge the pigeon from our last London trip in 2012 for example). 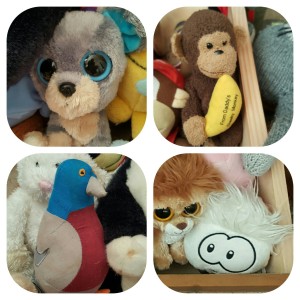 All toys that brought memories to mind.

I can’t even store them away. I want them to be accessible even though I could use the space for other things.

The children don’t look at these anymore. Jake, our toddler, might play with a couple (ie, empty the draw all over the floor and then abandon the game for another area of destruction!). They occasionally take one to bed, but really, who plays with all these stuffed toys anyway? They are such lovely things to buy but once you’ve got them home they just become part of the clutter.

What makes it worse is that I was never a cuddly teddy or even a dolly kind of child, it seemed babyish to me. My Barbie had a professional career in the City (and also a beautiful ballgown in case the career didn’t work out and she needed a Prince Charming!). Though you wouldn’t think that now if you saw what has become my secret stash!

As I found myself unable to part with many of them, I had to accept that it’s my relationship with these toys, and the memories they give me, that is what is stopping me getting rid of them. What does it matter, they’ve been with us this long, they might as well stop a while longer!

Tell me I’m not alone in this hoarding of kids’ stuff. Do you have any of your children’s toys you can’t bear to part with?

Losing a child changes you. It’s changed me certainly, and my thoughts and opinions about ‘what matters’. The solar eclipse wasn’t something I’d bothered to get excited about (it’s hard to be excited about anything these days), but I was surprised about how that opinion was turned around.

However, when yesterday, the day before the eclipse, my daughter came home from school and told me that her teacher would be keeping her class inside for an extra five minutes so that no one looked at the sun (and potentially damaged their eyes), I felt a knot of irritation rise up in me. This event (which in my eyes was a bit of a reminder from the heavens about just how amazing the universe is) is one of those one-offs that is unlikely to occur in my lifetime again, or even my children’s (though don’t even get me started on what I now term a ‘lifetime’; living to old age is something I don’t take for granted anymore, for anyone!).

My daughter asked if she could stay home to watch the eclipse or at least to experience it, as she’d be trapped in a stuffy classroom with no view. It was due to happen between 8.30am and 9.30am, and I thought, why not! I agreed that, if the sky was clear in the morning, both my daughter and son could stay off school to watch/experience the eclipse and I’ll take them in straight after.

I must admit I was kind of expecting a cloudy start so it’d be a fuss about nothing, but no, the sky was beautifully clear first thing and the sun was shining away. We all got ready and my daughter began to have doubts: ‘what if I get into trouble for not going in?’, ‘will they believe me?’, ‘will it be awkward going late into lesson?’. So then I began to waver too (being decisive in grief is near impossible, I’ve known myself to deliberate far too long over even simple decisions like whether to have jam or marmalade!).

I could see other families and people going about their daily routine. Other than a rather excited Brian Cox and some weather women scattered about the country, people around me seemed to be unfazed by all the hype.

But then this event is incredibly rare. It’s our moon casting a shadow over our earth, blocking out our sun. Who cares about school rooms and offices? (Although I did say that if my house was on fire, I’d very much rather the firemen were at work rather than sitting around watching the eclipse!)

My son decided he wanted to get to school on time. By 8.50am, the eclipse wasn’t really visible and was taking its time, he wanted to be at school. So I took him and came back to my daughter. She was scrolling on her phone, clearly getting bored by the ‘non-event’, so I told her to put it away and watch the facts that the people on TV were telling us about what we were seeing. He did some useful demonstrations about how the eclipse occurs and why in a million years from now we won’t have eclipses anymore as the moon will move further away from us (strange thought!). We also discovered we could use a colander to view the sun safely, so we grabbed one and went into the garden.

Again, not much happened for a while but then a patch of very light cloud came over the sun and the sky seemed to go dusky. The birds all went a bit crazy and flew back to the trees. Everything felt very still and peaceful.

We were able to take photos of the eclipse and could view it through the images on our screens, and with the cloud over the sun it was easier to look at (although we were very careful!). Our pictures weren’t amazing as we were totally unprepared but I think we managed to capture the moment well enough.

As soon as we’d got a few pictures and the eclipse started passing over, I took my daughter up to school with a note to explain why she was late. She was a bit self-conscious, after all, it’s not a usual reason to get out of class, but then I wasn’t about to make up something just because the school couldn’t be bothered to use this event as a way to educate all the children on the wonders of our solar system.

I vaguely recall the last eclipse, in 1999. I had just got married and my husband remembers going up the hill to watch it, along with a number of other people, all with special specs in hand. I didn’t go. I can’t even remember why. I was probably working. I probably thought ‘what a load of fuss and nonsense, I’ve got deadlines’.

Says it all really, doesn’t it.

I hope that in years to come my daughter will remember the morning she went in late to watch the eclipse with her mum and baby brother in the garden. It’s not the most amazing life-changing moment, but it’s far more memorable than being sat in a dark IT classroom pressing buttons on a keyboard. 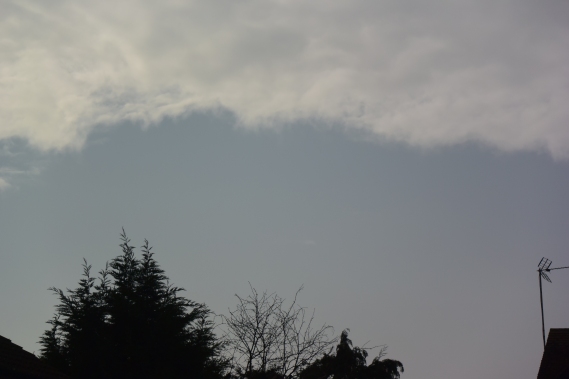 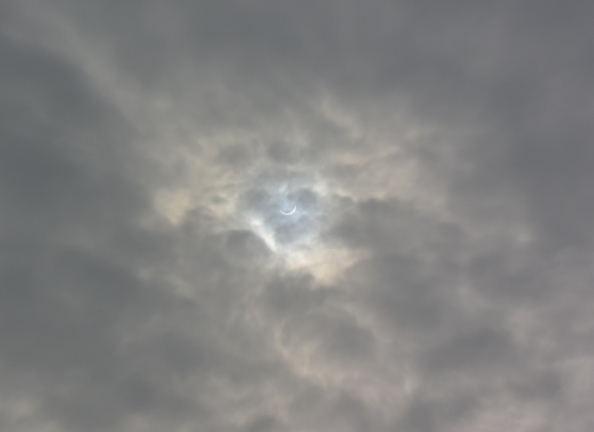 The moon and the sun in almost perfect alignment, looking rather magical peeking out through the clouds 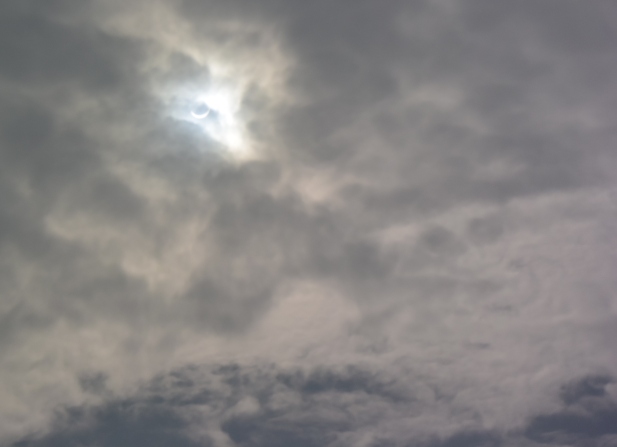 A memorable moment when the skies changed from bright to dull 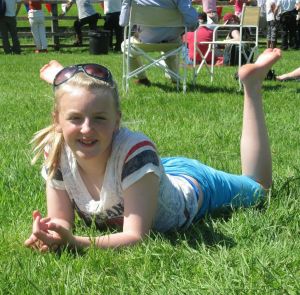 Some days I feel a heavy sense of confusion with my grief and the effort of trying to hold myself and my family together with some kind of normality. Yet, it’s often on days like this, when a sort of gloom has set in, that I receive an unexpected message of comfort.

It could be a school friend writing a note to Abi on her RIP page on Facebook, wishing her well in heaven, letting her know she’s not forgotten. A kind word from a friend, something I read, or a sign I see in the beauty of nature around me: a golden sunset, a bird building a nest in our garden, a forget-me-not…

At the weekend, I received a message from a friend who wanted to relay a story of how Abi had touched her family that week. With kind permission, she has allowed me to share this on my blog.

END_OF_DOCUMENT_TOKEN_TO_BE_REPLACED

We cleaned our cars at the weekend, not a common occurrence I’m ashamed to admit especially with a newborn keeping our tired arms occupied enough, but after the recent sandy rain we couldn’t put it off any longer.

However, there’s one spot in my car (the family estate) which I’ll never clean… the boot side window. The reason? An old blob of bubblegum.

END_OF_DOCUMENT_TOKEN_TO_BE_REPLACED

I decided to change my blog name to something more hopeful and settled for Chasing Dragonflies. So, what is it with all the dragonflies anyway?

While we were researching readings for Abi’s funeral, we came across the story ‘Water Bugs and Dragonflies’ (I’ve posted the full story here). As the story explained, we can never see what waits for us outside this world until we get there, but it is more beautiful than we can ever imagine. We are content, perfect and free…