I read last night this fascinating look at dogs’ way of communicating with us. I saw many similarities with our loopy Lab, Darcy, who is now 10 years old. Here’s a picture of him taken last week on a walk…

I was also reminded of the post below which I wrote not long after Abi died. I can still remember this very clearly as though it were yesterday. Have you had a similar experience with your dog offering you comfort or picking up on your distress?

I’ve heard numerous stories of dogs sensing illness and death, and pining for their lost masters. But it wasn’t until I experienced this for myself that I realised the true bond that dogs share with their human family, and the effect death has on them also.

Our dog, Darcy, is seven years old. He’s a generally easy-going dog, more interested in licking people and playing than disruptive habits such as barking or chewing. He likes to have an occasional woof at a lazy wood pigeon or a cat, but he’s never been much of a barker. Only in the past couple of years has he taken to having a couple of ‘woofs’ in the garden when he’s let out at night, always in the same spot by the back fence, but that is as ‘doggy’ as he gets. Equally, whenever we’d arrive home from a holiday, having been absent from him for a while, he would always trot straight out to the garden to have a wee – reclaim his turf I suppose – and then settle down somewhere for a sleep. However, for the next couple of weeks after we returned home from the hospital, he barked to such a point that we grew increasingly concerned, and somewhat spooked, by his behaviour.

When we arrived home, Darcy – who had been cared for by relatives while we were away – was very pleased to see us. We must have smelt very strange to him. I imagine the hospital odour lingered on us and he sniffed around us quite frantically. But then he ran away from us, around the downstairs rooms, and then begged to go outside in the garden. I let him out expecting him to do a wee but he immediately started bouncing around, barking furiously, which snapped me out of my numbed state of mind. It was as though he could sense Abi and was calling her home.

Over the next couple of weeks, he seemed on edge and frequently flitted from room to room. When he was in the garden, day or night, he would bark out loud, bouncing to every corner of the garden and down the side of the house. He was most definitely searching for something… for someone. Abi.

He would rise up on his hind legs and sniff at the air, everywhere. I tend to think logically about things like this, the dog could smell a cat or something… but having known Darcy since a pup, I knew his behaviour was far more than I could ever comprehend.

He’d wake us throughout the night with his barking, as though he was suddenly spooked or wanted to alert us to something. He’d never woken us up at night like this, not since we brought him home at eight weeks old.

I know this sounds an odd thing to say, but even the tone of his bark was different to normal. Any dog owner would agree that dogs have different barks – to show happiness, fear, a warning… and as Darcy didn’t bark that much, we could tell this was something else, it wasn’t quite any of those.

Whatever the reasons for his behaviour, our dog has proven to be more than just a family pet, but a part of the family who reacts to what we feel and brings us both comfort and joy (and the occasional headache of course!). If I cry near him, he often comes over and places his head in my lap, or puts a paw on my knee (see photo).

The barking and erratic behaviour settled down after a few weeks an,d today, he is back to normal. Unlike us, he seems to have adjusted to the fact that Abi’s not here, but he must still be able to sense and smell her here as we’ve not put everything away or changed much in our home. If only we knew… 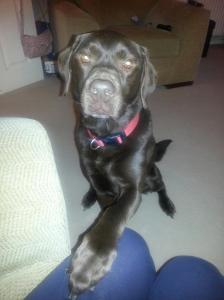