Dates are always important when you’re grieving and even though I try hard not to get on the anniversary train, it’s impossible not to think of ‘this time xx years ago’.

Abi died on 10th February 2013 aged 12 years old. I’ve posted before about the days leading up to us turning off her life support. We have four days of being reminded and also trying not to remember. But, in truth, this period of mourning starts much sooner than this. Of course, I think of Abi every day, but 26th January is a particular day that no one but me secretly remembers.

On that date, we celebrated as Abi finally graded for her black belt in kung-fu, something she loved and had worked hard for over four years.

On that date, I mourned the death of my baby… what would have been our fourth child.

I recall the overwhelming emotional effort to hide the fact, to hide my shame and despair. It very nearly broke me. But I focused on Abi, on all my happy, healthy children. It was all I could do not to go insane.

Having decided to have a fourth child, I had miscarried our first attempt at 7 weeks, just as I was coming round to the idea of being pregnant again. Yet, to my utter surprise, just five weeks later I was already pregnant again. I was so confused by my dates that I didn’t realise until I was eight weeks gone. So, when I did find out, I was convinced this one was meant to be.

A gruelling and risky CVS test (an injection into the womb) gave us a diagnosis. I was given two options: stay pregnant and watch your baby suffer and likely die, or do the ‘kindest’ thing and end it now. No one offered to make that decision for me. I had to do it all myself.

My very being broke in two at that news. Google became my best friend, spending hours researching, looking for any chink of hope. There were always stories of miracles and even misdiagnosis, but I had to admit this pregnancy felt different, I was sicker and more tired than I had been all the other times, as though my body was telling me something was wrong.

My husband worried most about traumatising the children, the impact on our family. Of course he was worried about me, and was very sad, but he had a degree of emotional detachment making him able to think more logically than I could. For me, logic flew out of the window.

My heart broke more each day.

I could feel the first flutters of life inside me. I dreamed (quite seriously) of running away, putting myself into confinement somewhere so I could just have this baby on my own without anyone else suffering. I had a relationship with this tiny child in my womb that deserved something from me… I felt helpless.

I chose the ‘easy’ option. I have never said the ‘word’.

That’s of course not what it was at all, but it was at that time the ‘best’ option for us out of two terrible ones.

So, on 25th January, we snuck off like thieves in the dark winter morning before the world was awake. I stuck out like a sore thumb waiting on the ward with teenagers who’d ‘been caught out’ and were fixing a problem. Overhearing conversations and even laughter, some had clearly been there before.

We sat in stony silence. There were simply no words. When it came to my turn, the hurried nurse stopped in her tracks when I unexpectedly burst into tears. Tears normally happen after, when you come round from the anaesthetic. I felt trapped, panicky, wanting to run but knowing I had to go through with it. My body trembled uncontrollably.

I had never felt so alone. Even with my dear husband with me, unable to do more than simply hold my hand.

By lunchtime, it was over. I cried when I woke. I was going home. I felt physically empty and emotionally numb, yet also in a way relieved that the worst was over.

Back home, I stayed in bed as advised. The children bustled in happily from school and asked me what was up. I told them I had a bad back. Another lie. Another layer of lies upon lies as I had pulled out of social events, hidden my growing bump and withdrawn from the world in the weeks before. What was a few more lies? I stuffed my shame and grief to a deep, dark place.

That was it. I didn’t allow myself to cry again. Not many people knew, so I could pretend it never happened. I had to take this as a lesson that I should stop trying to have more children. We needed to quit while we were ahead.

But the guilt followed me everywhere. It was one thing to lose a pregnancy, but another to be the reason for that baby dying when it did. I bled for weeks, that’s what happens. Every single day a shameful reminder of what that blood represented.

Two weeks after that awful day, Abi collapsed following a massive brain haemorrhage. I sat in a hospital in Bristol in the middle of the night stunned and scared that I was losing not one but two children, my first and my last. My faith wasn’t strong but I was convinced God was punishing me for my sin, a life for a life, what else could it be? It took me a long time to make peace with that. He showed me through Abi that that was not how He loves.

My grief for the baby was pushed even deeper inside. My grief for Abi ‘trumped’ it all. The unthinkable became my reality.

How I wished the baby was still inside me. Maybe it would have stood a chance. I would at least have had something to hope for, but in truth I knew that the shock of losing Abi would most likely have caused a miscarriage in any case.

While Abi’s death was clearly a much more significant loss, I still felt trauma about the baby. In some ways, it was worse for while, as what happened to Abi was out of my control, yet I had control over my baby’s fate. I had to carry this all alone because everyone around me was consumed by their own grief. Few people knew, some had suspicions, but it was as though that loss couldn’t possibly compare to Abi so it was too difficult and awkward to mention, after all no one knew what I was feeling because I didn’t, couldn’t, tell them. I was simply another mother, carrying the burden of incredible losses. For doctors, it was a ‘medical’ problem that had been dealt with in the best way. Socially, I had no right to complain, I had done what I did through choice. So I used my public tears for Abi as a way to shed secret tears for the baby, and for myself.

Months later, I realised that in order to make peace with what I had done, I needed to find out what sex my baby was. I had previously asked not to know because I didn’t want to become even more attached. I contacted the consultant and they dug out the file.

On 22 July 2013, Kate Middleton gave birth to Prince George and as I watched the news on TV, I held a letter in my hand telling me very professionally that my baby had been ‘a female’. I cried then, for her, my other baby girl. I looked on at Kate’s radiant face holding her precious baby and tears streamed down my cheeks. I gave my baby girl the space she deserved to be mourned. I said sorry to her and told her I’d hold her one day, when I’m also with Abi.

Abi had suspected my pregnancy and after her death I found a diary she’d written only weeks before with a list of girls’ and boys’ names. The poignancy of this was almost impossible to bear. I dug it out from the box of things that was still under her bed. From the list of names, I chose Bella.

So, Baby Bella finally had an identity. She had existed within me for only 14 weeks but she was still made with love, she was wanted. I know she is perfect now, where she is, and that Abi is with her. Her various scan photos and the letter from the doctor are all I have of her, but they have been tucked away with Abi’s memory boxes for that time when I can face looking at them. It’s taken me five years to openly talk about Bella. Would she have made it to five? I can’t torture myself with that thought…

Since then, I have been quite remarkably blessed with not one but two healthy children, my rainbows. Naturally, the pregnancies were fraught with grief and anxiety but they were both smooth and they are such happy children, I cannot fail to feel joy.

I don’t dwell on this loss now, but, as I head into this season of remembering, I felt it only right to give Bella a special mention… my baby who never was. 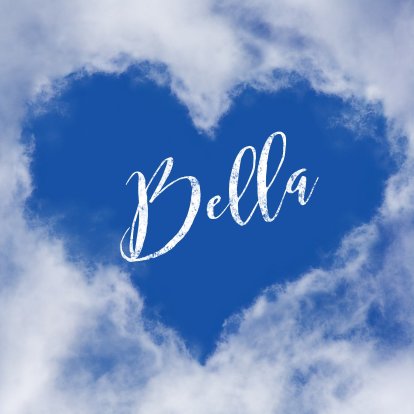 11 thoughts on “The baby nobody mentions”