It takes me way out of my comfort zone to ask people to vote for me (even if I did ask them for their money), but having been nominated for the JustGiving Awards 2018, I have quite amazingly been shortlisted in the Crowdfunding category, so I suppose I’ll have to spare my blushes and just ask for a vote!

When I set up the crowdfunding page, I hoped it would bring in something to help pay for the design and print costs for The Dragonfly Story, which I published in April 2018. I had a wonderful illustrator in Helen Braid, and also a fantastic printer lined up; I didn’t want to cut corners. It was so important that this story was gently narrated, colourful and engaging, and that it had the quality of a book that could be read again and again… Why? END_OF_DOCUMENT_TOKEN_TO_BE_REPLACED

There are numerous ways to set up memorials for loved ones, and Beautiful Tribute has successfully provided one way to do that online. An online tribute is a simple way to remember someone, and because it is accessible anywhere it can be seen and contributed to by other people who also take comfort from it.

Set up by UK-based founder, Sandeep Sekon, this website also offers a fundraising option to help people raise memory of their loved one.

Last summer, I ordered a mobile phone case for my gorgeous new Samsung Galaxy S5. Having previously dropped a phone and lost everything, I wanted something that was tough but that didn’t make my phone look clumpy. I also wanted a cover that I could personalise with a photo of Abi, so I could see her face anytime. It was a big ask as choice is actually pretty limited out there – either expensive but dull or cheap and flimsy. So I was pretty excited when I came across Getincased.com, an online company specialising in premium design mobile phone covers.

It was so easy to create my custom case and it arrived within a couple of days. The case was perfect in every sense. Really good quality, discreet and eye catching.

The owner of the company was so touched when he heard about Abi and our sad loss that he wanted to help. And so it was that Getincased.com started to donate proceeds from sales of their mobile phone cases to Wallace and Gromit’s Grand Appeal, the official charity of Bristol Children’s Hospital where Abi was cared for at her death.

A few months later, the design team had worked really hard and presented me with some beautiful designs focused on my blog, Chasing Dragonflies. Proceeds from sales of these would go straight to the charity.

The company also nominated Wallace and Gromit’s Grand Appeal as their business charity, meaning further funds in the pot and have also pledged a box of iPads to be sent to the hospital for the poorly children to use while they are there. In only nine months, they’ve donated an amazing £2,000!

We’ve built up a lovely rapport with a company that puts people before profit, that is using their business to do good things – for no other reason than because they are compassionate human beings who want to help.

I’ve always loved my Abi phone cover and, indeed, as I use my phone as a camera, every time I take a photo the picture of Abi is smiling at whoever I photograph. This has been particularly poignant with our rainbow baby who never knew his biggest sister but can now recognise her in photos.

However, with my recent feelings about the focus of my grief shifting slightly, I thought it a good idea to get a new phone cover. This was more with my children in mind than me, who I wondered might feel a little put out that Abi is the only child I have on my phone cover (sibling rivalry doesn’t stop with death!). But, I also really wanted to own one of the gorgeous Chasing Dragonflies designs so it’s a good reason to get a spare! And here it is… 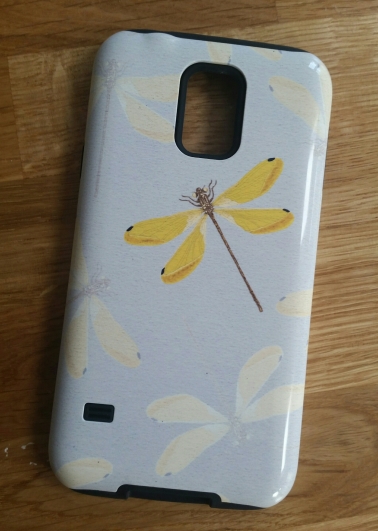 I’ve bought a number of different phone cases in the past but these are by far the best. I think they are worth every penny. My original case is still as good as new, and it’s survived a fair few knocks in the nine months I’ve had it!

If you’ve got an iPhone (4, 5, 6 or 6 Plus) or Samsung Galaxy S5, or are getting an upgrade to one of these models, and you want to make sure you get a phone cover that makes it look even better, please consider choosing from one of the designs at www.getincased.com

They have lots of on-trend designs to choose from and if you buy a cover from the Chasing Dragonflies collection your money will be doing good for the patients at Bristol Children’s Hospital, the main intensive care hospital for children covering the South West, UK.

A few months ago I bought a new mobile phone cover with Abi’s photo on it. A brave move for me as it had been, and still is, hard for me to look at pictures of her. It was so well made and quickly delivered that I wrote a review of the company.

END_OF_DOCUMENT_TOKEN_TO_BE_REPLACED

A few days after Abi died, we were already thinking about how we could somehow give something back to the people who helped her, and as a way to remember her life.

It’s hard to explain why, while sat in a hospital waiting room with my daughter still with us, I had this urge to do something charitable. It wasn’t too strong at that point, I had a lot on my mind with Abi, but I recall ‘holding that thought’ as I felt it would be something we could do when it was over, whatever the outcome.

Having seen the Wallace and Gromit Grand Appeal promotional material at the Bristol Children’s Hospital, it seemed an appropriate cause and we’d decided the best place for any donations.

Abi died from a rare brain hemorrhage that only a CT scan would have picked up, and even still, it was in an inoperable location so she could never have been saved from her fate. The only reason the doctors agreed to operate on her was because she was a child – doctors are parents too – if she had been an adult, we later discovered, they would not have intervened at all. A heartbreaking prospect.

END_OF_DOCUMENT_TOKEN_TO_BE_REPLACED

I’m running Bristol 10k for the Wallace & Gromit’s Grand Appeal in memory of Abi. For various reasons, I’ve not run since November last year, so while in my mind I could ‘easily’ run a 10k, having run a few in 2012, my body needs some reminding! There’s 8 weeks till the run, so I should be up to speed by then if I take it slow and steady.

When this happened to Abi, things that had been important to me day-to-day fell into insignificance. I felt that I would never want to run again, and certainly never work again. As time has passed, my attitude has changed, and I’m very relieved about that. Abi loved me being ‘fit’, like her. I would say she even nagged me when I missed a class or a run. It was our mutal interest. I could almost hear her talking to me, saying ‘get up and run, Mum’.